How can an urban theatre in the world make a difference? According to Chokri Ben Chikha, the answer lies in 'playing', in the broadest sense of the word. It is about increasing the playability in the city. This can be done in several ways. Three tips in Etcetera & rekto:verso. 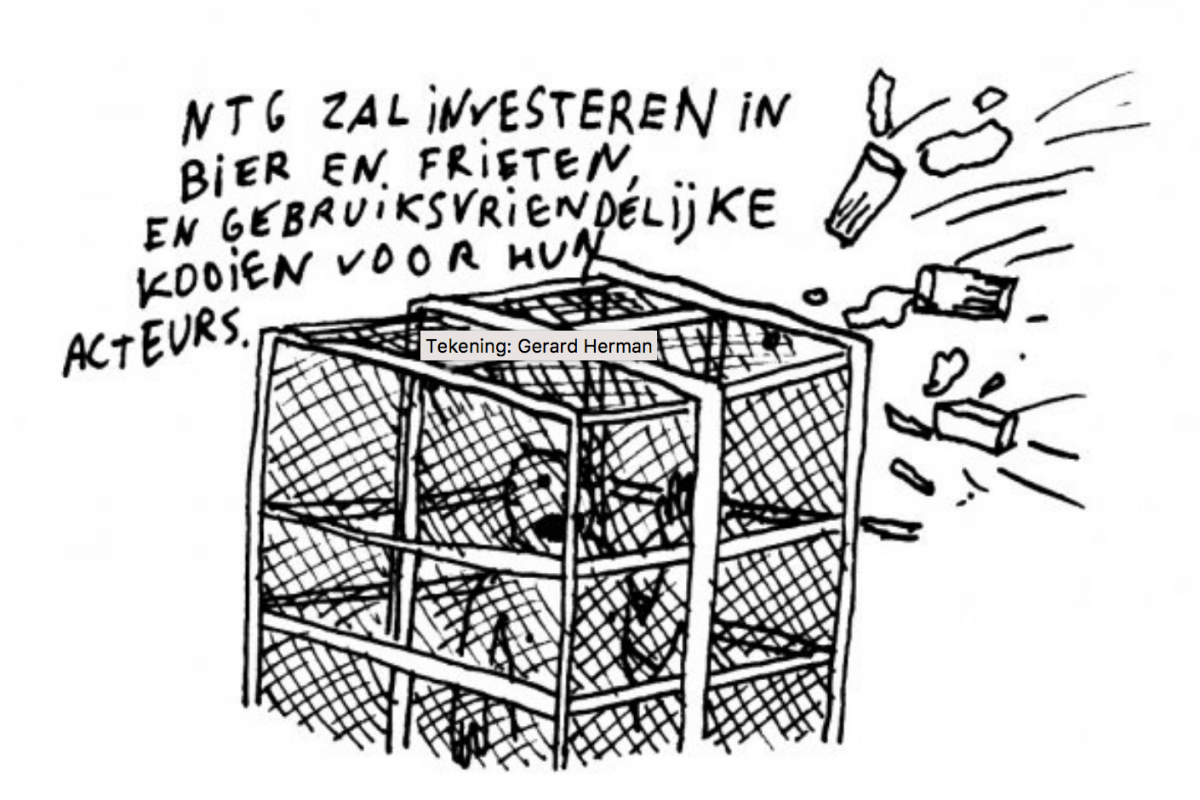 Right in the middle of the city, right in the middle of the world': that was the appealing slogan Johan Simons introduced at NTGent at the time. It remains a fascinating question: how can an urban theatre in this world make a difference? In my opinion, the answer lies in 'playing', in the broadest sense of the word. It is about increasing the playability in the city. This can be done in several ways.

What is an urban theatre? The name says it all: it is a barometer in the city. And since globalisation, the city has long since ceased to stand alone; it has become the world in miniature. This makes the city such an extremely interesting biotope: many people and cultures have a very high density of touch here. This often causes conflict, but also gives the city its vital dynamics. It is precisely this interaction that should be the guiding question for an urban theatre: what about the city around us?

What is worrying today is how strongly different groups are going to entrench themselves against this dynamic behind a national identity. I am not only talking about hateful twitter storms from populist and nationalist quarters against everything that is alien to them. At events in my neighbourhood I also increasingly see Turkish flags flying, meet young people or neighbours who are mainly focused on Turkish media. That indicates a missed opportunity. It has always been thought that the second and third generation would automatically merge into the mix, but of course that never happens automatically. Something is at stake. And the city is the game board par excellence.

The 'playability' of a society is the opposite of communities that fold back on themselves. It is the first characteristic of a climate that does not regard the current relationships between people and convictions as insurmountable rudders, but as changing structures. It is the flexibility to keep identities and realities open, fluid and dynamic. Playability' requires dialogue and exchange, mutual openness. Some humour and imagination too. And empathy. All qualities that the arts have practiced in for centuries.

What a city theatre can add to this is the symbolic capital that is needed to give real meaning to such a play with identities and fixed truths and to spread it more widely. NTGent plays in a league in which, for example, the UZ, the S.M.A.K, the Ghent University, AA Gent or the OCMW also play: by no means everyone gets there, but everyone knows the symbols. The idea is also that everyone should be able to get there. These are therefore (semi)public institutions that represent necessary functions in Ghent, from art and sport to social care. Their own situation radiates on the image of Ghent itself - which is why politics is more quickly awake to it. When the head of these symbolic institutions speaks, they listen. Much less applies to many other places in the city.

If I, as a leading mission for the new NTGent, were to argue in favour of 'promoting the playability of the city', then it is on the basis of this conviction: an urban theatre has a number of extra trump cards for this as a large institution. I once experienced this myself. In 2003 I was lucky enough to be part of the NTGent team to create deLeeuw van Vlaanderen, a performance that also resonated strongly outside the theatre walls. With Action Zoo Humain, NTGent and Johan Simons we now face a similar major challenge in 2017 with Subject, an adaptation of Houllebecq's novel Soumission. But playing the city is more than just performances. In concrete terms, I propose three lines for the future of the Ghent house:

1. Play the debate in the city

Increasing the playability of the city presupposes that you as a house are intensively involved with that city. However, in recent years NTGent has been too busy with itself. It can make its voice heard much more often in the public debate. When a sudden protest arises against a company selling the Korenlei for a private event, I find it strange that a city theatre does not interfere in it. If there is a broad discussion about mobility, you can't leave such a theme to politics alone, can you? A city theatre must constantly ask itself the question: how can we, as an artistic institution, help to keep opinions on one or another public issue playable? That need not only be reactive, it can also be visionary.

It is about keeping a finger on the pulse and raising the right questions. The difficult situation of the Roma in Ghent, the rise of a civil movement like Hart boven Hard: I expect a city theatre to take a stand on this from time to time, or at least to offer a place where conflicting opinions can enter into dialogue with each other. Take a look at the Ghent Festivities debates that take place every year in the theatre, and which are full of venues. Why does NTGent limit itself to facilitating these debates? Now that the organiser has stopped after so many years, why not jump into the hole yourself?

Of course, this is not an obvious exercise. Certainly not if your board of directors is partly politically composed. However, a house should dare to enter into a much more compelling dialogue with this. Rather make an occasional mistake than constantly withdrawing your tail. Ideological neutrality is one big illusion. At the same time, an urban theatre is of course also a big machine, which requires a lot of planning in advance. But in addition to 'slow art', I believe in 'fast art': responding directly to current events. At the time of the major strikes in 2012, Vooruit distinguished itself, for example, by using We strike back to organise a major connecting event in no time at all, and to offer a place to all the sentiments surrounding national topicality. It is therefore possible. Sometimes people in a city need to decompress together. In such situations, a city theatre can also offer a good outlet.

This certainly does not always have to be done with a stance or debate; it can also be done artistically. If it is true that we have seen a post-truth era dawning today, a grateful playing field opens up to question precisely this ethics of lies and truth. Ambiguity is our core business as an arts field, many truths confront our accumulated expertise. Take, for example, the debate on refugees, migration and radicalisation: there is so much disinformation about them. In such a spirit of the times, artistic truth must clearly be included on the map and offer injections to open up such discussions much further. Truths' are there to play with. It would give our artistic playing a much greater impact.

Of course NTGent can't do that alone. You don't have to, you play together. But there is still a lot of work to be done in that area at Sint-Baafsplein. Too often NTGent and other larger houses seem to want to invent the hot water themselves, just think how much money and energy is lost on it. Preferably appeal to the know-how available in your area. Because in order to make society playable, several areas of expertise are needed anyway. Extend your network to other artistic players, other sectors, other perspectives. How can it be that a not sour part of your city experiences Ramadan for a month, while in city theatre it just passes by without anything happening around it? An urban theatre can make respectful attention as a critical artistic reflection possible around that month of fasting. Do not underestimate its psychological effect. This could give some communities more credibility. The first step to appealing to more diversity is simply to work with it.

I am also thinking of more links with the academic world, even during the production phase of performances. There is so much knowledge and good will at the university that is not addressed enough. There is also far too little exchange with the KASK - certainly in view of the history of the Ghent municipal theatre. Beyond the classical internships, Ghent city theatre and the Ghent theatre school know far too little about each other. Lower the threshold for performance or drama students, reinforce each other to make the city theatre more of a place for experiment again.

In short, it is about the city theatre being a bridge builder between the centre and the periphery of both the city and the arts. Ghent, for example, has a social-artistic scene that can be a shining example even on a European scale, but there are still too few bridges to make their practice simply visible to their own theatre audience. In the past, the urban periphery was sometimes depicted in a seasonal brochure, with beautiful photographs of NTGent employees in people's living rooms. But in order to turn such trips into more than handy PR actions, we first and foremost need a substantive, artistic and production collaboration.

Build bridges, forge extra ties, surround yourself with people and organisations that know what's going on in your city. Both the playability of our society and its reflection in the central theatre will benefit from this.

More cooperation does not necessarily mean that NTGent loses its own profile. Much depends on who becomes the new artistic director. In my opinion, the key question is not whether it should be an artist (or a club of artists), or an intendant without artistic aspirations of its own. The most important thing is that it does not become a grey figure, but rather one or more personalities who commit themselves full-time to that one function, who have vision, who share a love for the city and know what is going on, who breathe a passion for art and who dare to apply themselves to a distinctly personal attitude.

It must therefore be someone who ensures that NTGent is not too preoccupied with itself, who can continue its international activities, who can inspire and direct a team, and who does not shrink from expressing his or her opinion on the public forum. An own pretext for the new NTGent starts with those qualities - provided that the board of directors also allows them all freedom. Because if an urban theatre wants to be able to fully focus on the playability of society, this requires a game without too many formal rules and interference.